What is apple canker?

Apple canker is a serious disease which needs to be identified, and, if present, it has to be eliminated from young trees. It is caused by the fungus Neonectria ditissima (also known as Neonectria galligena or Nectria galligena). Infections can be initiated both in spring-summer, by means of spores dispersed by water from the creamy pustules that form at the edges of an existing canker, and in winter and spring, dispersed by airborne spores released by raised red pustules.

Infection usually takes place at an existing wound, such as a pruning cut, but also at leaf scars, and the wounds caused by scab, woolly aphid and frost. It attacks the bark of the tree, producing a sunken, blackened area of bark, which gradually extends to the underlying tissues. If left untreated, it will continue year after year, eventually leading to the death of the branch. The roots of the trees are not affected. 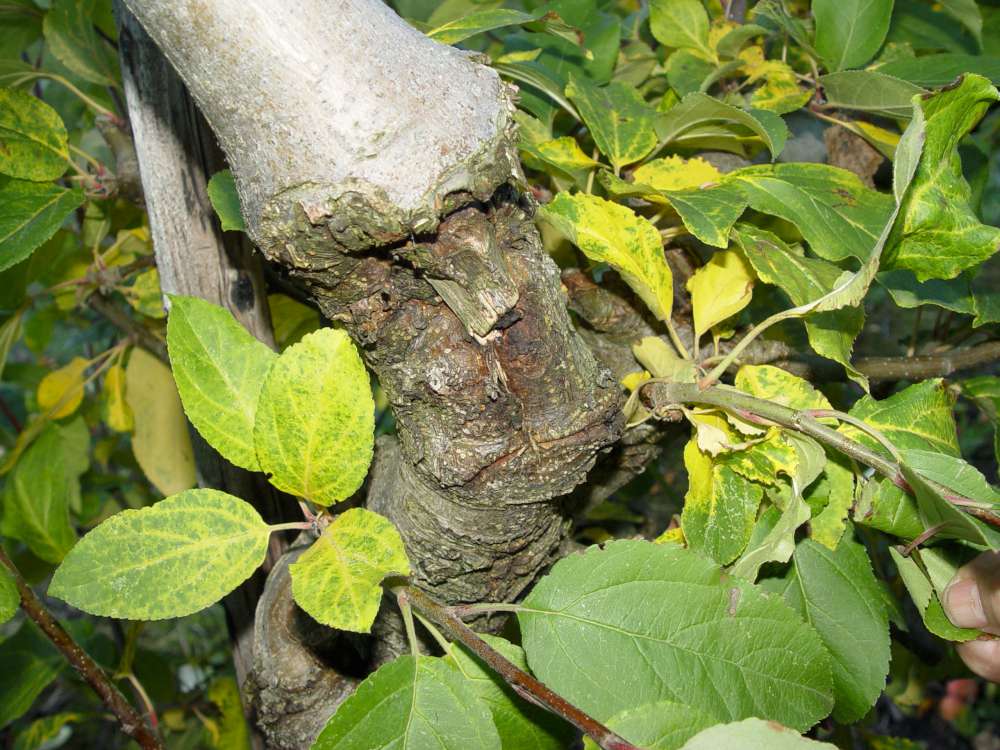 How to treat apple canker

Canker is a fungal infection, and it used to be treated with copper-based sprays. These have been withdrawn from the market, under EU regulations. Therefore the only means to eradicate this fungus is to cut out all diseased wood, using a curved canker knife. The wound should be painted with “heal and seal,” with at least a 1-inch overlap, right around the trunk if necessary.

The material removed must be taken out of the garden or orchard and burned. Spores continue to be released from wood on the orchard floor, particularly during the dormant period of the fruit trees. That’s why as a matter of urgency, all cankers on the tree trunks, whether large or small infections, have to be exposed, removing the tree guards to inspect that part of the trunk, and then cut out.

This method of control has to be completed by no later than the end of October. A second check of the treated wounds should be carried by the end of March, before the trees get into leaf. Watch a video tutorial on how to cut out canker.

If you find a lot of canker infection, it may be necessary to adjust the trees’ nutritional programme. Nitrogen and high humidity offer the ideal conditions for rapid growth of the canker fungus. Therefore, if your trees are suffering from canker, it is wrong to apply any nitrogen from September to the end of February. If nitrogen has to be applied, it is best to do it during the first week of March. Canker seems to be more serious on wet, heavy soils, and so drainage needs to be good.

Go back to the pests and diseases page.