It is mistaken to think that tree size can be controlled by pruning. The fundamental factors involved in determining tree size are the rootstock and the depth of the soil. When ordering trees, the choice of variety is important, but tree size is also fundamental to ensure that the final trees are right for your garden.

The major factor involved in determining fruit tree size is the rootstock. Most fruit trees consist of two parts. The first is the “rootstock” or “stock,” which comprises the root system and the lower part of the stem, normally from soil level (the so-called “nursery mark”) to about 15 cm above the ground. The second is the “scion” which comprises the rest of the stem and the branches, and so it is this part that bears the fruit. Trees are created by grafting a tree variety – say Cox apple or Victoria plum – onto a rootstock. 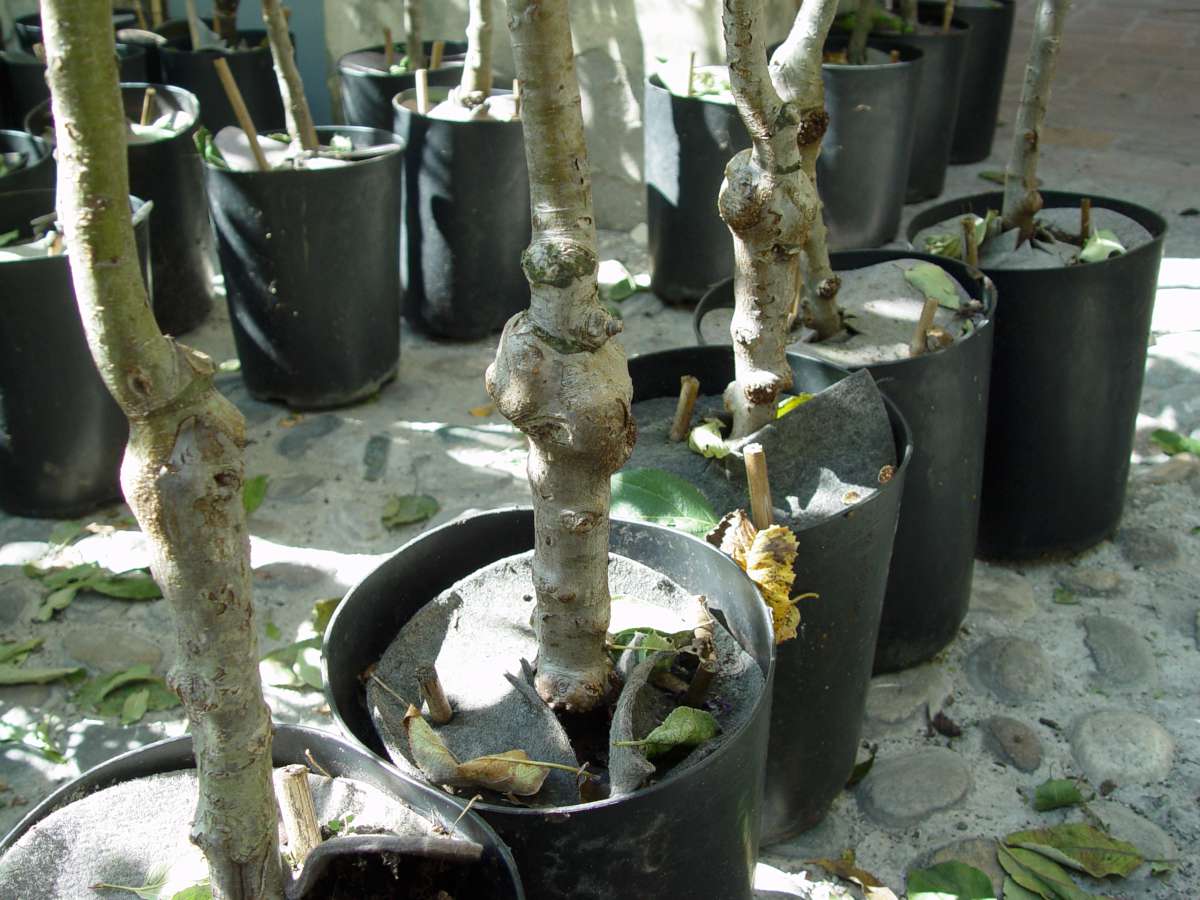 This system is adopted to control the size of the tree and to improve cropping. So, for example, for apples, the rootstock named MM106 gives rise to a tree reaching a height of about 10 feet, while M26, M9 and M27 produce progressively smaller trees. M27 and M9 are therefore known as “dwarfing rootstocks.” However we do not recommend the use of M27 and M9 for apples for the average garden situation, primarily because in the average garden, M27 and M9 create a root system that is too weak to keep the tree upright in later years, when it is in full production. Secondly, the correct type of stakes necessary to stop the trees from blowing over are often unobtainable in garden centres. Third, M27 and M9 trees tend to over-produce fruit in one year, with no, or very little, fruit the following year. Lastly, the bark of M27 and M9 apple trees are the most appetizing to mice, rabbits, hare and deer, which nibble the bark in winter, leaving sick trees with too small fruit..

For successful apple tree growing, MM106 is the best rootstock choice. It has proved itself over many years, and it forms a healthy tree which fruits at a young age. MM106 is suitable for all soils, including heavy clay soils, provided the soil is not waterlogged.

Other factors in addition to rootstock are involved in determining the height of a tree at maturity. These include type of soil, height of the location above sea level, exposure to cold winds or frost pockets, and the winter rest level of water in the soil. Equally important is tree spacing. The further trees are spaced apart, the greater their final height will be. This is why the figures shown below are provided as approximate guidelines only.

Another fact to remember is that the size of a tree at the time of planting does not affect the size eventually achieved. 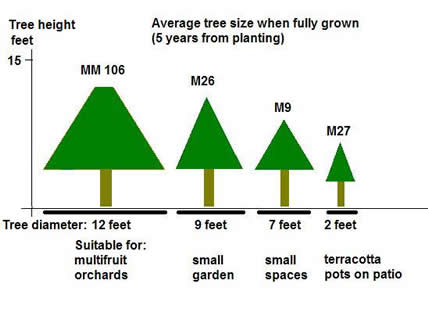 Please note that the tree heights described above are given only as general guidelines. The final tree height depends greatly on depth of soil, site, and quality of soil.

You may ask, why can’t we be specific about planting distance? Why 8-12 feet and not, say, 10 feet? This is due to the many factors involved. Apart from the rootstock used, the variety of fruit, the depth of the soil, the available light and moisture throughout the growing season, all will influence the crop load and therefore the size of the tree. A heavy cropping tree will put on less new growth (extension growth) compared with a light-cropping tree. As an example of variety difference, Bramley’s Seedling makes a larger tree than, say, James Grieve. Trees grown on deep, water-retentive soil become larger than trees on drier or shallow soils. Trees grown in the shade crop less, and so tend to get larger than trees growing in sunshine. Fruit trees which go short of moisture during the summer months stop growing earlier each year, and will make shorter shoot extension growth. Fruit trees which are poorly pollinated will produce less fruit and therefore the annual extension growth will be much greater.

Finally there is the influence of the tree’s overall health, the site, microclimate, grass, weeds around the tree, depth of planting, nutrition, type of pruning, and the season in which pruning is performed. In fact, late summer pruning (in late July and August) tends to reduce the rate at which a tree will grow, whereas traditional winter pruning (November-March) produces strong regrowth of long new shoots.

So it’s a complicated equation. One rule of thumb that always applies is: if you have room, give the trees as much space as possible, so at the top end of the space range as detailed above. This gives them the chance to develop a fine tree canopy.

One particularly important factor when purchasing a fruit tree from a supplier is whether it is a Maiden or a Bush tree.

A Maiden is generally a tree in its first year, consisting of a single stem. For a few varieties, this may have a few initial side branches, but most will not. The buds on a maiden are mainly wood buds. So there is no chance of any fruit crop in the year after planting.

A Bush tree is a 2 to 3 year-old tree, usually with several side branches, usually with a good number of fruit buds. Fruit buds are essential for early cropping. A bush tree is also helpful because the side branches are ready to develop into the main framework of the tree, with a “fruit table” positioned for comfortable picking. Not all fruit trees form side branches in the second year, but, if it is an apple, in any case the tree will start to produce fruit on the central stem. By nature, pears, plums and greengages always take longer to come into production . Therefore in particular with these fruit types it is wiser to start with a 2 to 3 year old tree. With a bush trees, cropping usually begins the year after planting. They are sturdy, strong and healthy, with good levels of reserves in the tree structure. This helps them to resist diseases caused by the fungal spores that are always present in the air.

The height of the tree is not a feature which encourages early cropping.

Modern fruit trees are generally grown on a dwarfing or semi-dwarfing rootstock that keeps their size down to manageable levels and can be grown to produce a fairly flat table at a height convenient for picking without ladders. But sometimes we get requests for the traditional old English fruit tree, the sort that grows to an appreciable size and ends up with gnarled branches that young children can even climb. An ideal tree for a village green with a good space around the tree to do Maypole-type dancing is the Granny Smith. The fruit hangs on the tree until Christmas without dropping and looks spectacular. However somewhere in a garden nearby there has to be a pollinator… otherwise no fruit!

A much better tree for a very large lawn or a village green is a John Downie crab apple. The fruit looks good and makes wonderful crab apple jelly.