How to train an apple espalier

Home » How to train an apple espalier

Tree training is a way of shaping fruit trees for various reasons. An espalier apple or fan shape enables a tree to be grown in a reduced space, perhaps benefiting from the extra shelter offered by a wall or building. Very often, espalier training is used primarily for decorative purposes. But we have to remember that not all types of fruit trees are suitable to be trained in shapes that are different to the standard open-centre type of tree. For example, it is inadvisable to train cherry or plum trees, as cordons, espalier or stepover trees. This because of the increased risk of bacterial canker. In addition, the life expectancy of plum and cherry trees is much shorter than that of apple or pear trees.

Let’s start by considering the basics of successfully training apple trees. First and foremost, it is hopeless to try training fruit trees which are not healthy or are struggling due to lack of water during the months of May right through to the end of September. So therefore, make sure that the tree is well watered throughout the growing season, so that it is really growing well, before trying to shape it to your heart’s desire. This by the way applies to all types of fruit trees.

Secondly, it’s worth remembering that when the tree’s shoots are young and less than a year old, they are full of moisture and are therefore very flexible and unlikely to break. And even if you use the wrong shoot for tree training in those early stages, and you see that it is not producing the results you were expecting, don’t worry, nothing is lost and you can try again.

For the same reasons, you can be most active in your training activities in the months from May all the way through to the end of September. Altering the angles of 2-year-old branches can be done any time later, when it suits you, and when the weather is cooperating. Making changes to the shape and angles of older branches, is hard work and less likely to be successful. So work with the tree when it is full of vigour and young. If you do that, then the tree will cooperate, and you will discover just how exciting this job can be.

How to regulate the vigour of branches 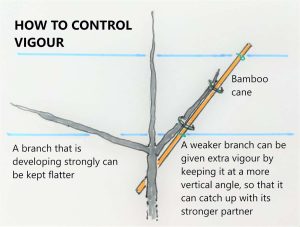 During the formation of the basic framework, you may observe that the branch on one side is more vigorous than its partner on the other side. You can adjust vigour by changing the angle of the branch. The more vertical the branch’s direction, the more vigorously it grows. You can use a bamboo cane to hold the branch at the desired angle. Another way of increasing the vigour of a branch is to make a number of small pruning cuts in the branch during winter months – in other words, make cuts in the branch to a depth of about a third of its thickness.

It’s best to search online or in your local hardware shop, and purchase the right tools and tying materials. We recommend English tapener tying tools. In my view they are the best value for money and you get a proper explanation how to achieve the best result. Only use string as a last resort. In this case, thin plastic ties are the most flexible ties, with little risk of constricting the expanding woody shoots.

Tree training and strength of growth

Another factor that can be taken into consideration is linked to the strength of growth. If your young tree is growing very strongly, it is best to do your basic tree formation tying later in the season, in other words, from July to September. You will then also have more choice as regards what to tie, and you will be able to see which shoots are too strong and will have to be cut out completely. In the same vein, if the tree is growing very strongly, leave yourself an option in the tree structure, branches that you can prune back to. This makes it possible to totally prune out excessively vigorous growth, very late in the growing season. A good time for this is the last week in September. No later, as after that date, the net effect of removing surplus growth may be even worse. Do the serious cutting back when the tree is preparing for its winter sleep. You will certainly have little trouble with regrowth occurring all over the tree if you prune back at that stage.

Nurseries that grow and supply fruit trees often offer apples trees that have been pre-trained as espaliers. Obviously these are much more expensive than the usual 1 or 2 year old apple trees. Here I will look at a well-grown maiden 1-year-old apple tree, and I will describe the basics of how to turn this young tree into an espalier. It will usually take around 4 years to complete the basic training.

If you are installing posts in the open, ideally they should run north-south, so that the espalier trees face east-west.

The structure has to ensure good support that lasts over the years. This means galvanized wire 2.5mm in diameter, with straining bolts so that if necessary the wire can be tightened subsequently, stakes at a distance corresponding to the distance between the trees, and reinforcing wires with soil anchor at each end.

If you are stretching wires on a wall or fence, you can use brackets attached to the wall to hold the wires about 4 inches from the wall. The aspect of the wall or fence is very important. Plants such as pears and figs are best grown on south-facing walls. West-facing walls may be suitable for cherries, plums, damsons, green gages, apples and berries. East-facing walls are colder but may be suitable for cherries, early pears, plums, damsons, green gages, apples and berries. North-facing walls are the coldest and only certain varieties will be successful: these may include early apples, morello cherries, damsons and some berries. 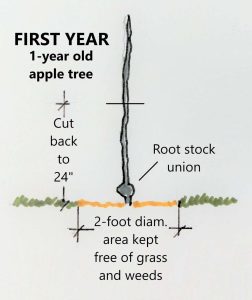 The tree will have been planted in its position during the dormant season, so ideally in January or February. After planting, prune the maiden tree back to 2 feet above soil level. Ensure that there is a 2-foot diameter area of soil which is completely free from grass and weeds around the tree.

At the point to which the tree has been pruned back, new shoots will develop. The strongest vertical shoot should be retained as the extension of the leader. Then, if the tree has grown well during the summer months, another two shoots will have formed just below the leading shoot. These shoots are usually at a sharp angle and should only be used if there are no other shoots available at a better angle. If two flatter shoots are available, these should be used in preference to the sharp-angled shoots. They will form the first layer of branches. At the appropriate time from May to September, tie these two shoots out along the lowest horizontal wire of the supporting framework. Cut the extension of the leader back to about 20 inches above the first tier of horizontal branches. If the tree has not grown enough, it may be necessary to create the first tier during the second growing season. 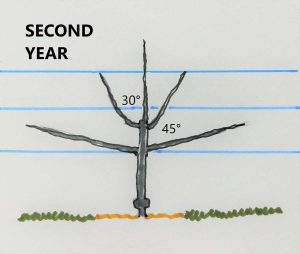 However sometimes the new growth is so strong that the pruning has to be modified. If more horizontal side shoots are already growing strongly from further up on the central leader, use two of these horizontal shoots and tie them out along the second layer of horizontal wires. All surplus shoots will have to be removed from the tree. If the side shoots are really doing well, don’t cut them back. This will encourage fruit bud formation on those newly-formed shoots. So the second tier may be put into place already in the first year, or in the second or third years, according to vigour.

Third and fourth tiers of an espalier apple tree

Depending on the vigour of the tree, following the same procedure for the second tier, third and fourth tiers can be constructed. Always bear in mind that over-vigorous vertical competing shoots should be totally removed. In the late summer months, shorter vertical shoots can be pruned back by a third of the total length, and this will encourage them to gradually become fruiting spurs. When the fruiting spurs are becoming too complex, they can be thinned out appropriately. 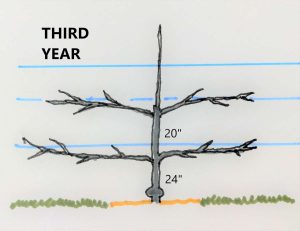 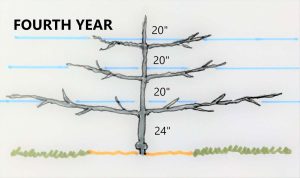