Suffolk Pink is the name of an apple, but it is also a specific colour that has been used for centuries for painting houses in this part of the UK. From the 14th century, builders would add substances such as elderberries, blackthorn, sloes or pig or ox blood, to the usual limewash. Today there are several shades of pink used for historic Suffolk houses, such as rose pink, shell pink, raspberry and geranium, and there are often restrictions on the colour that can be used in the case of a listed house.

And so when a new apple variety was discovered in Suffolk in the late 1970s, with attractive pinkish-red skin over a pale yellow background, the name Suffolk Pink was an inspired choice. Suffolk Pink is the best early apple, ripening by mid-August. It is a hard, crisp apple, with a pleasantly juicy flesh, and a flavour offering a good balance between acidity and sweetness. Its flavour is good, moderately intense. Suffolk Pink is a self-sterile variety and so needs a pollinator.

The origin of the Suffolk Pink apple variety 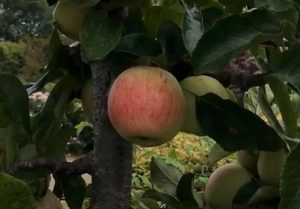 The origin of the variety is not clear. In 1975 Dan Neuteboom had planted a row of Discovery and Worcester Pearmain, trees supplied by nurseryman Jack Matthews. In about 1980, Dan noticed that one of these trees looked different to both of those varieties, and produced apples that were neither Discovery nor Worcester. He conferred with Jack Matthews who couldn’t identify the variety but suggested that he was willing to propagate it.

“Jack Matthews’ nurserymen took some budding wood from the original tree, and they propagated the variety by budding it onto EMLA 9 rootstocks”, says Dan. “A few years later, I was growing enough of the new variety to show to a buyer at Waitrose supermarket. They were interested, and suggested the name Suffolk Pink themselves. I did not register the name, nor did I claim plant breeder’s rights. I subsequently planted many more of these trees in orchards elsewhere in Suffolk, at Hemingstone and Stonham Aspall, and in due course, when I retired, those orchards were sold. So Suffolk Pink passed to other owners who were able to propagate it freely”. Waitrose now holds exclusive distribution rights and so apples of this variety are still available in their supermarkets.

How Suffolk Pink develops its colour

Suffolk Pink’s lovely colour is produced in part by sunlight, and so as for most varieties, summer pruning is needed to enable light to reach the fruit. But in 2019, Dan Neuteboom noticed that notwithstanding normal summer pruning and loads of sunshine, by late August, when the fruit was ready to pick, it hadn’t coloured up normally. It had been an exceptionally warm summer, with hot days and warm nights, therefore with a far lower temperature excursion than normal. So in some way, temperature excursion plays a part in developing fruit colour. Cool nights are needed for red-blushed fruit. Click to watch a video about this effect in Suffolk Pink, with narration by Dan Neuteboom and camera by John Paddy.